The Greek Gods are sitting up on high as judges. There have been rumblings down on Earth that things aren’t fair. Apparently, and much to the disapproval of the Gods, some of the mortals want to be elevated to the status of God. How dare they!

The so-called Greek Heroes take it in turns to justify their cases. They each have a three minute pitch. The floor resembles a cross between “Britain’s Got Talent” and “X Factor” with Zeus being the lead judge (Simon Cowell). The other judges are Hera, Hades and Aphrodite.

Some of the contestants include: Icarus who sings “First Boy in the World to Fly” whilst moralising on why we should all, when all said and done, listen to our dads; Theseus, the swashbuckling idiot; Orpheus, who claims to be the first man to have entered the Underworld, all in the name of love; and Jason, proudly wearing the golden fleece.

In order to keep the judges happy, there are a handful of muses to introduce each pitch. They may also feed the audiences with Greek dishes, if they can get themselves organised. The muses include: Tzatziki, Taramosalata, Moussaka, Feta and a rather bedraggled Pita.

At one point a wizened man appears (Socrates) and starts spouting forth a load of bunkum. He doesn’t last long as does a slave (Aesop) who bursts onto the stage and starts rambling on about a hare and a tortoise. No one makes the connection.

It’s dear old Hera who suggests that the democratic thing to do would be to let the audience decide who their most worthy Greek hero is, who might have a chance to sit amongst the gods. Zeus is furious with this idea and storms off.

Finally, with the possible gift of immortality coming their way, all the heroes decide to run a mile. Who wants to live forever? they all declare.

A soothsayer (Oracle) tries to predict events. It would be fun seeing someone in a cloak and pretend trance and speaking some words in Ancient Greek!

As the evening wears on, it becomes apparent that the gods are all related and are all full of flaws. Who’d want to be mixed up with that bunch of hoodlums! 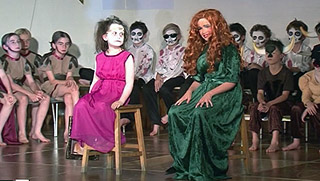 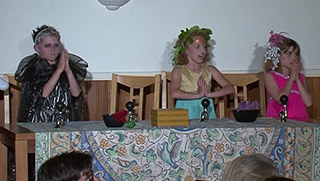 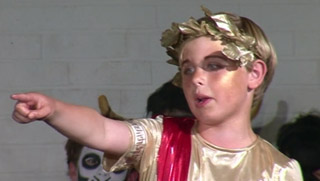 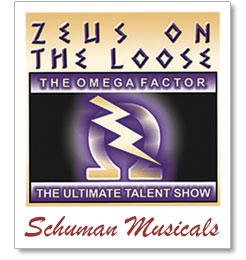 ZEUS ON THE LOOSE – Sample Score

ZEUS ON THE LOOSE – Sample Script

Listen to the Soundtrack